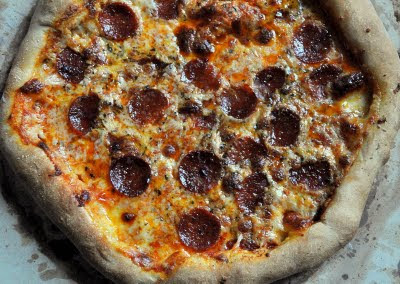 So today my little brother, John, is graduating from 8th grade. I can't believe he's that old already!! And his birthday is this weekend so it's a super party packed weekend ahead (and don't forget Father's Day is in there too). One thing that anyone who knows John is aware of is eating habits. He is the most particular eater ever. (As I've mentioned before in my younger days, I tended to be a picky eater too but I surprisingly grew out of it). And my little brother is no different! His favorite foods consist of the ever famous Kraft Mac and Cheese, Chicken cutlets, Pizza, and Eggo Waffles. But at least there is some good homemade food he likes too. And pizza is probably his favorite food ever. So for this weekend of celebrating, we will be having some homemade pepperoni pizza for my ever picky, ever crazy, ever silly, little brother!

1 pizza crust dough (we bought ours from a pizzeria, but you can make one or buy one from a grocery store too) 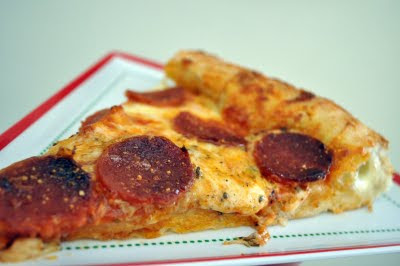 1. Shape your dough into an flat oval with your palms and place on a your work surface.

2. Sprinkle some corn meal over the dough and flip it over. Start rolling your dough until it reaches your desired thickness.

3. Transfer your dough to a pre-heated pizza stone or a metal pizza pan/cookie sheet lightly greased with shortening and stretch it to cover the surface, even have some overhang if possible. (Your pizza stone should be warmed in 475 degree oven for about 10 minutes)

4. Now I wanted to try something different with this pizza, so I took mozzarella sticks chunks and lined them around the edge of the pizza pan and rolled the overhang of crust on top of the mozzarella sticks to make a stuffed crust. Be sure to pinch the dough together or the melted cheese will escape-a lesson I learned.

4. Spread your sauce over dough top with mozzarella cheese. Sprinkle on your seasonings; salt, pepper, oregano, and basil.

5. Add the pepperoni slices. I purchased a stick of pepperoni and used a mandoline to cut them. It was a super fast and easy way to cut pepperoni and you can gauge the thickness you desire.

6. Sprinkle on your Pecorino Romano cheese(and you can use more than the suggested amount above, it's ok. I won't tell anyone) and maybe even a little extra mozzarella too since this is a stuffed crust pizza, it's all about the cheese. 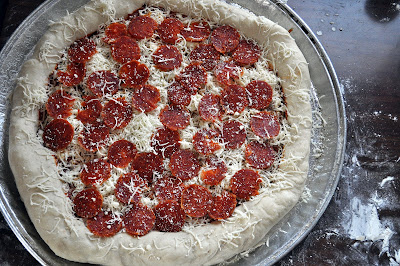 7. Bake your pizza for about 15-20 minutes on 425 degrees. I also like to broil the pizza on low just for a minute when it's done to crisp the pepperoni. Enjoy your pizza!! 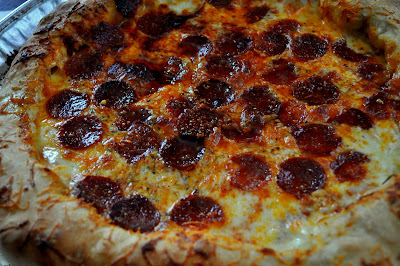 Posted by Our Italian Kitchen at 9:38 PM

Email ThisBlogThis!Share to TwitterShare to FacebookShare to Pinterest
Labels: Pizza