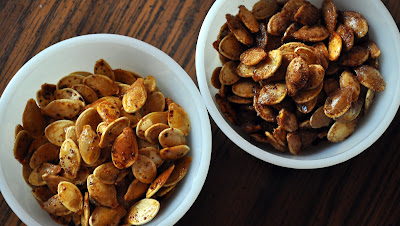 After carving some cute pumpkins with my husband and brothers, I carefully scooped out the pulpy insides and dug through the "gross mushy stuff," as my brother John calls it. He used "gloves" made of ziploc bags and masking tape to remove it from his pumpkin. It took quite while to separate the seeds from the pulpy flesh, but the that's the only time consuming part of this recipe. The rest is so simple, that my little brother could even handle it.

This recipe is for my Dad who can never get enough of hot, spicy food. He only likes something spicy if it makes his face is red like a tomato and his eyes are watering. 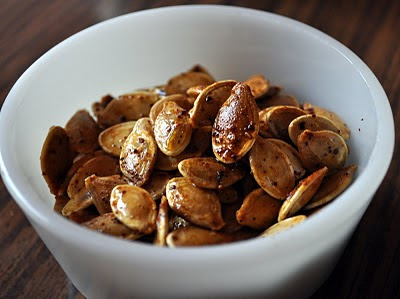 
1. First step, you need to wash your seeds very well. I rinsed them in a colander for a few minutes.

2. Pat the seeds dry with paper towels. Place in a bowl to toss.

4. Pour seeds on a cookie sheets and sprinkle with seasonings. Stir around to mix well. 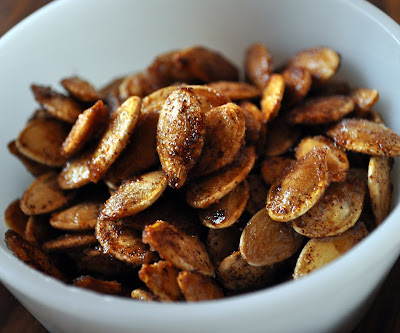 
1. Follow same process as above, wash and dry seeds well.

3. Spread out on cookie sheets and cover with sugar and cinnamon. Stir to mix well and then bake at 300 for 30-40, stirring occasionally. 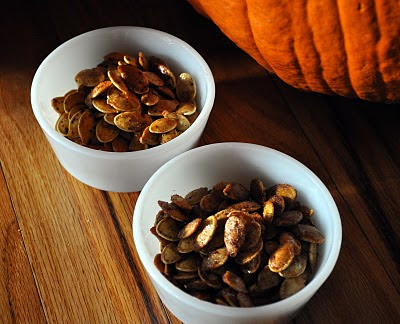 Posted by Our Italian Kitchen at 5:58 PM